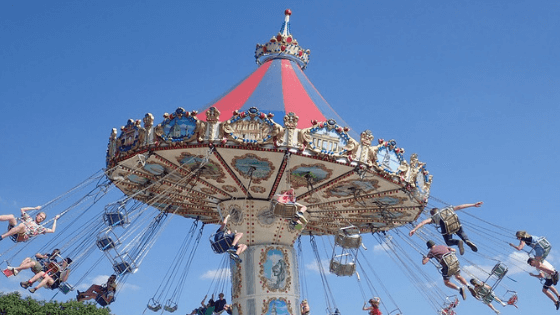 These are our pick of the best theme parks and amusement parks for children in no particular order.

This list is not meant to be an exhaustive list. If we have left out your favourite theme and amusement park for children, let us know in the comment section below.

Is the first theme park in the world to be designated as a Certified Autism Center (CAC).

Children and adults can ride, drive and operate real diggers, dumpers and other full-sized construction machinery.

Are you planning a trip to Disney for a child with disabilities or medical needs?

Knoebels is a free-admission amusement park for families, with rollercoasters, classic rides, etc.

Story Land is the best children’s’ theme park in New Hampshire, offering rides and entertainment to thousands of families for over 60 years.

Is a Walt Disney World theme park with daily and nightly attractions and experiences.

This San Diego amusement park is great for toddlers, kids and adults.

The roller coaster capital of the world. Is the second-oldest operating amusement park in the United States.

Morgan’s Wonderland is a 25-acre non-profit theme park in San Antonio, Texas for guests of all ages and abilities.

Two great parks for the price of one! Dorney Park & Wildwater Kingdom is an amusement and water park owned and operated by Cedar Fair USA.

The Land of Make Believe is a family amusement park & water park catering mostly to families and children under 13 years of age.

A lego toy system theme park, also known as Legoland Windsor, is a child-orientated theme park and resort in Windsor, Berkshire in England.

Is an all-inclusive immersive experience where you and your family will experience exciting animal encounters.

Twinlakes Family Theme Park set in 100 acres of Leicestershire countryside with over 50 Rides & Attractions in the UK.

A family run business for a great day out! Aimed at families with children aged up to 12 years old. Located in the UK.

Construction machinery attraction with full-size diggers, tractors and dumpers rides and drives. Located in the UK.

An adventure park for families located in Horning, a parish in the English county of Norfolk.

Commonly known as Idlewild Park or simply Idlewild, is a children’s amusement park located in the USA.

An amusement park in Oakland California USA that has delighted children and their parents since 1950 with whimsical storybook sets, gentle rides, etc.Dreamworld

A theme park and zoo situated on the Gold Coast in Queensland. It is Australia’s largest theme park with over 40 rides and attractions.

The Sonoma TrainTown Railroad is a tourist railroad and small amusement park in Sonoma, California.

Gulliver’s Kingdom is a theme park aimed at children aged 3 to 13 in the Derbyshire town of Matlock Bath, England.

Is a park complex with facilities that include hills and hiking trails, Zoo, garden, and an amusement park.

Fantasy Island is a Family Amusement Park that sits in the middle of one of the biggest spreads of Holiday Parks in the United Kingdom.

Wholesome Fun for the Family. Indoor and Outdoor games available for rent. View all posts by Fontt